Due to the pandemic – national lockdowns, government restrictions and the wish to social distance, many more people have taken up cycling this year. People have experienced the huge health and wellbeing benefits of getting outside, and how this can be incorporated into a daily routine through active travel. Results of a recent West Midlands Combined Authority survey, showed pre-COVID-19, one percent of respondents had primarily cycled to work; this had risen to seven per cent since the crisis. Two percent said they cycled to shops before the pandemic, compared to four per cent since.

Through the Emergency Birmingham Transport Plan and money from the Government’s Emergency Active Travel Fund, Birmingham has created temporary ‘pop-up’ cycle routes on roads to create safer spaces for cycling. As lockdown restrictions have eased and people are returning to work, this is a fantastic opportunity for people to continue to cycle or start cycling for short journeys. 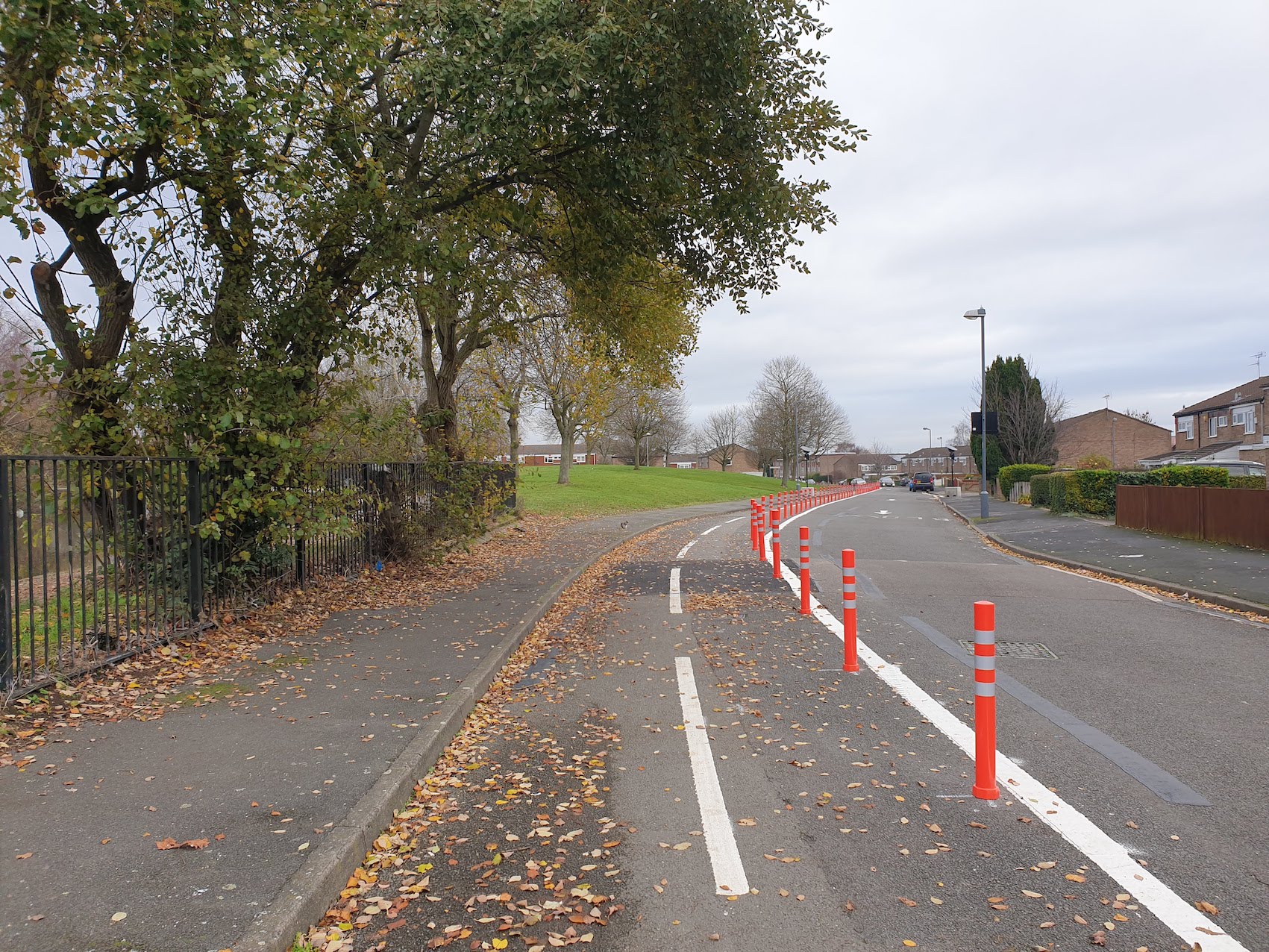 At first, I was disappointed when I heard that it was only a shared bus/cycle lane with no segregation from Selly Oak to Northfield, but I can say that I have been pleasantly surprised. This has become one of my regular routes for commuting. The existing (painted white line) cycle lane has been widened with more painted bike signs on the road which immediately gives you more confidence being on a bike, making you feel like you have a right to be there. The whole lane is now also a bus lane. There are less buses than I expected, and they are very generous when passing. There is almost a whole lane between you and the main traffic on this stretch, so it feels great. None of the cars are able to close pass and you are not affected by their speed.

As an experienced cyclist I was happy with this, however I worried that new cyclists would be reluctant 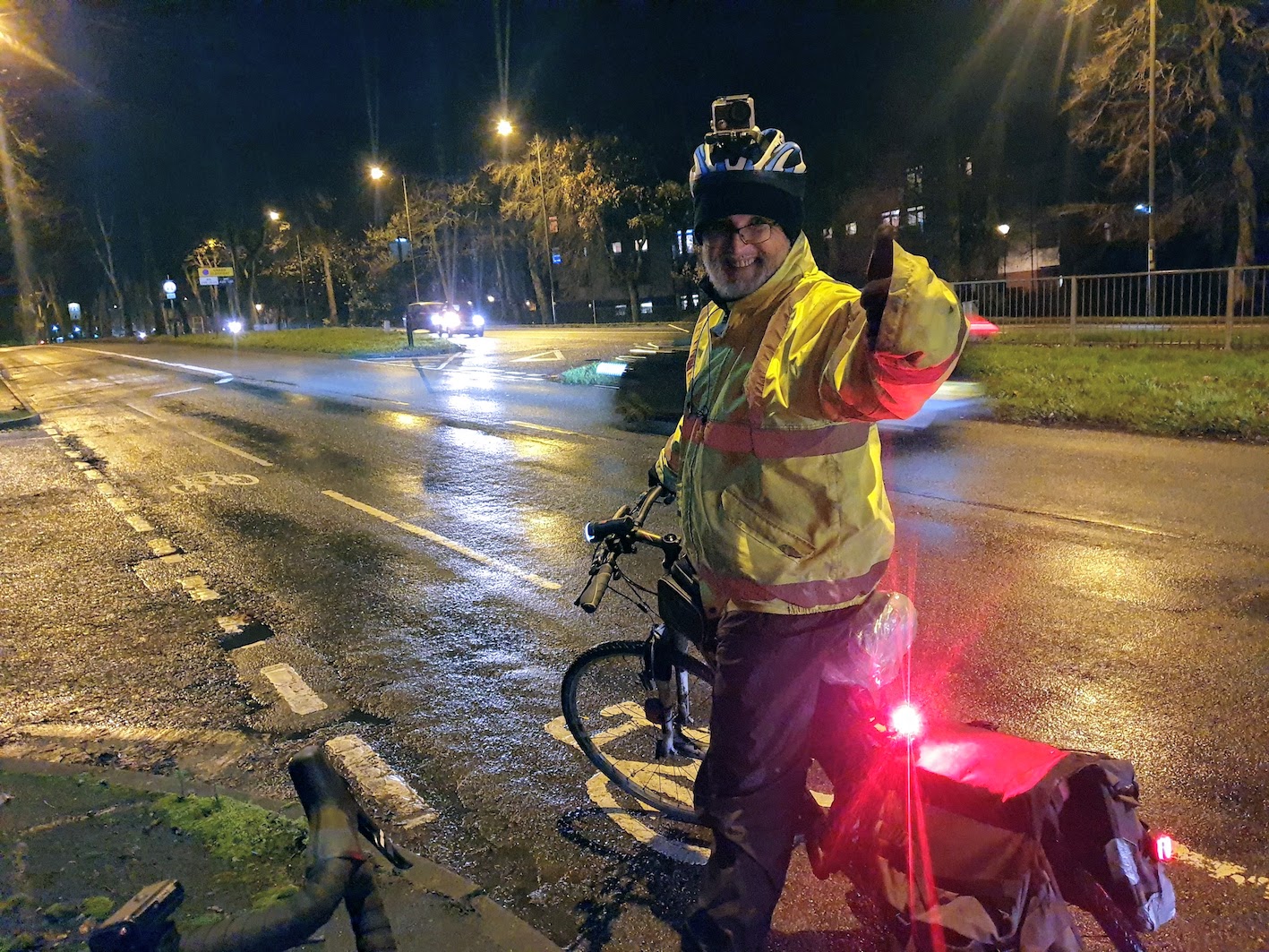 to give it a go. Stopping to take a photo on my way home one evening, I saw lots of people on bikes using the lane and I met Mario. He stopped to check I was ok – which was lovely of him. We had a little chat, and Mario told me that he thinks the lane is fantastic! He works at the Children’s Hospital and enjoys cycling on the canal in the Summer, but dreads the dark nights coming. He now feels safe when cycling whatever time of year and doesn’t need to worry if he needs to work late. He’s noticed that the bike racks at work are now almost full, and is certain that this is because of the new cycle lanes across the city. Being separated from cars takes away the sense of danger. A new cyclist doesn’t have to worry about a car over taking too close or riding too slow up the hill. You can just enjoy the ride. It’s a big thumbs up from Mario.

The following week I was asked by a Northfield resident if I could show her some local cycle routes. She had bought a bike from eBay and wanted to cycle more often, especially as she recently started a new job and wanted to cycle for her commute. As she was new to cycling, I planned a 11mile route from Northfield – a nice urban route which is mostly traffic free. We also cycled a small section of the A38 pop–up cycle lane so she could experience cycling on the road. You can find our route HERE.

Lisa, is a mother of two and said she ‘feels much safer on the Bristol Road with the new bus lane and cycle path. More space away from cars makes you feel safer’. She said she would happily cycle all the way up to Selly Oak on her own. This was great to hear as when we were on a smaller side road she preferred to cycle on the pavement. She said that she didn’t feel safe on smaller roads where cars were often driving too close and too fast.  She said she ‘would defiantly not cycle on local roads with the children.‘ This made me realise just how important cycling infrastructure is if there is to be a future for every day cycling in the city. 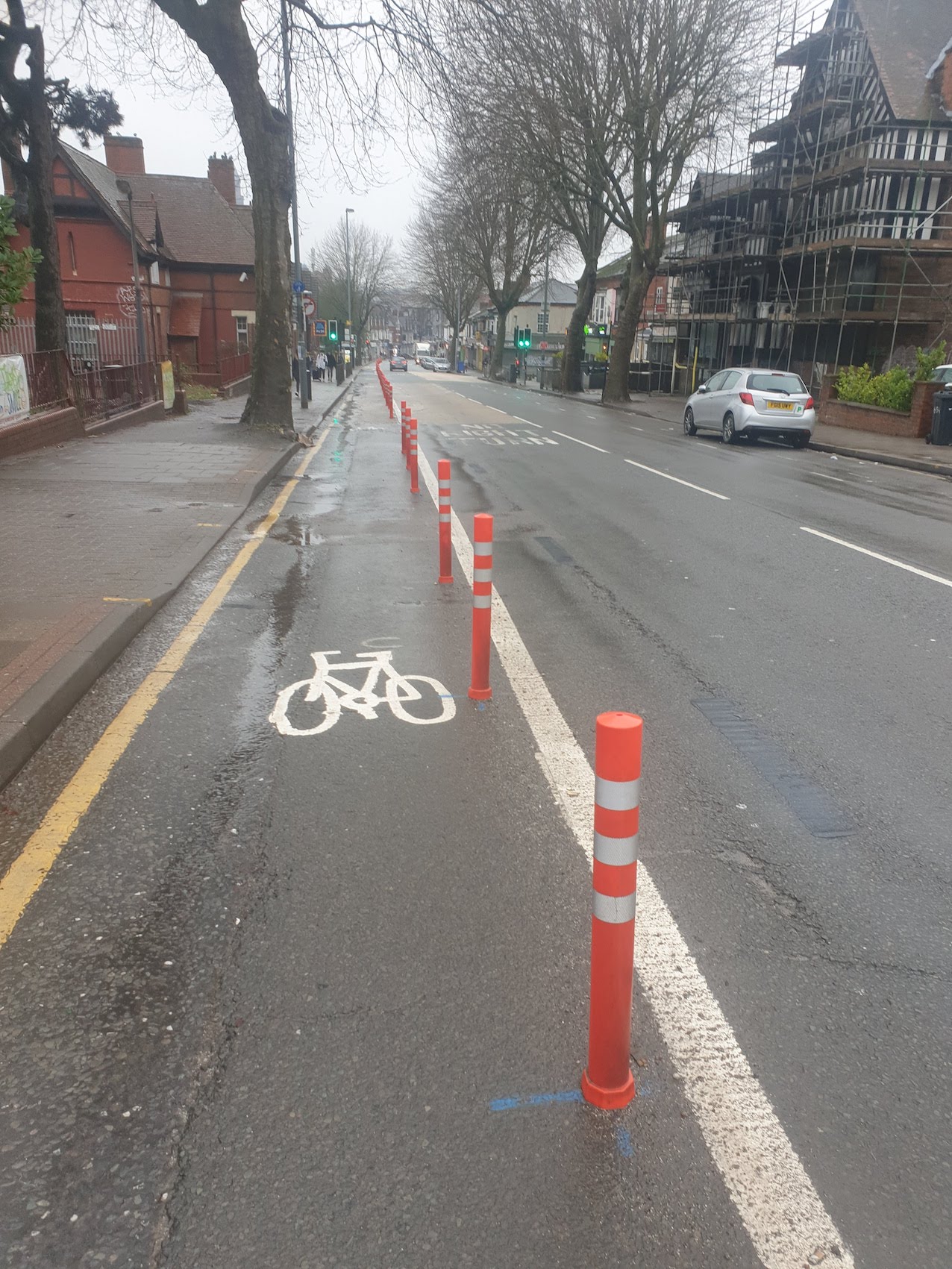 Selly Oak High Street – I have ridden this route many times since it was implemented. I have to say I’ve found the High Street is a little confusing when coming from the city centre towards Selly Oak Triangle. Coming off the A38 Blue route, it is unclear where you should be riding, and it feels like there is no way to get onto the High Street other than being on the road with the traffic. Being a terribly busy road this can be daunting however, after a few trips I noticed that you are supposed to stay on the A38 Blue shared path, cross the toucan crossing outside Starbucks and you will find a segregated cycle lane on Grange Road taking you to the High Street. There is also some confusion as the lane changes from two way to one way, and you must cross the road to get back into a cycle lane. After a few attempts, this has got easier to navigate, and it is nice to see so many people utilising this route. Being right next to the University and residential streets it is perfect for people to be able to cycle to University, the shops and for socialis
ing by bike. 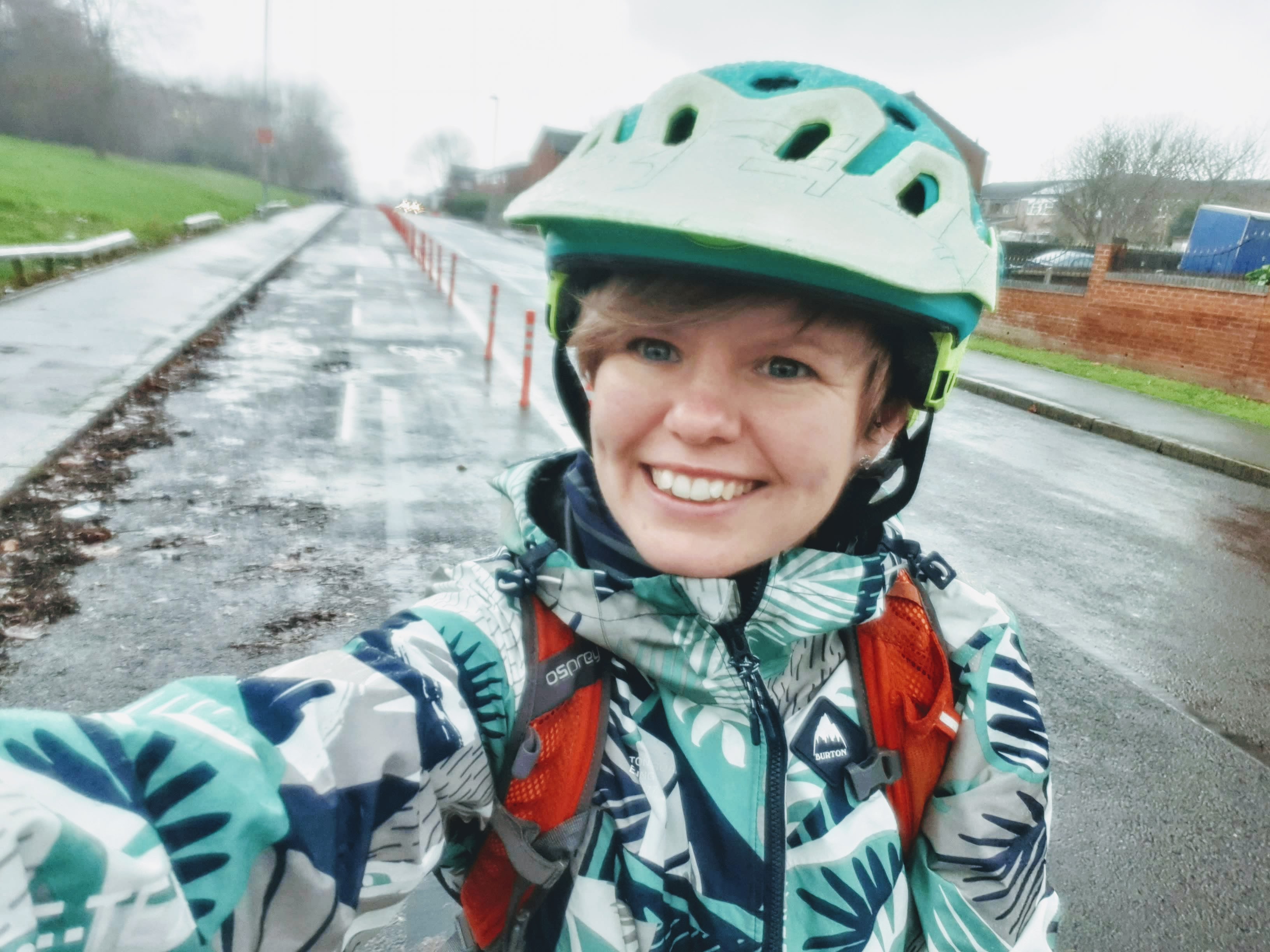 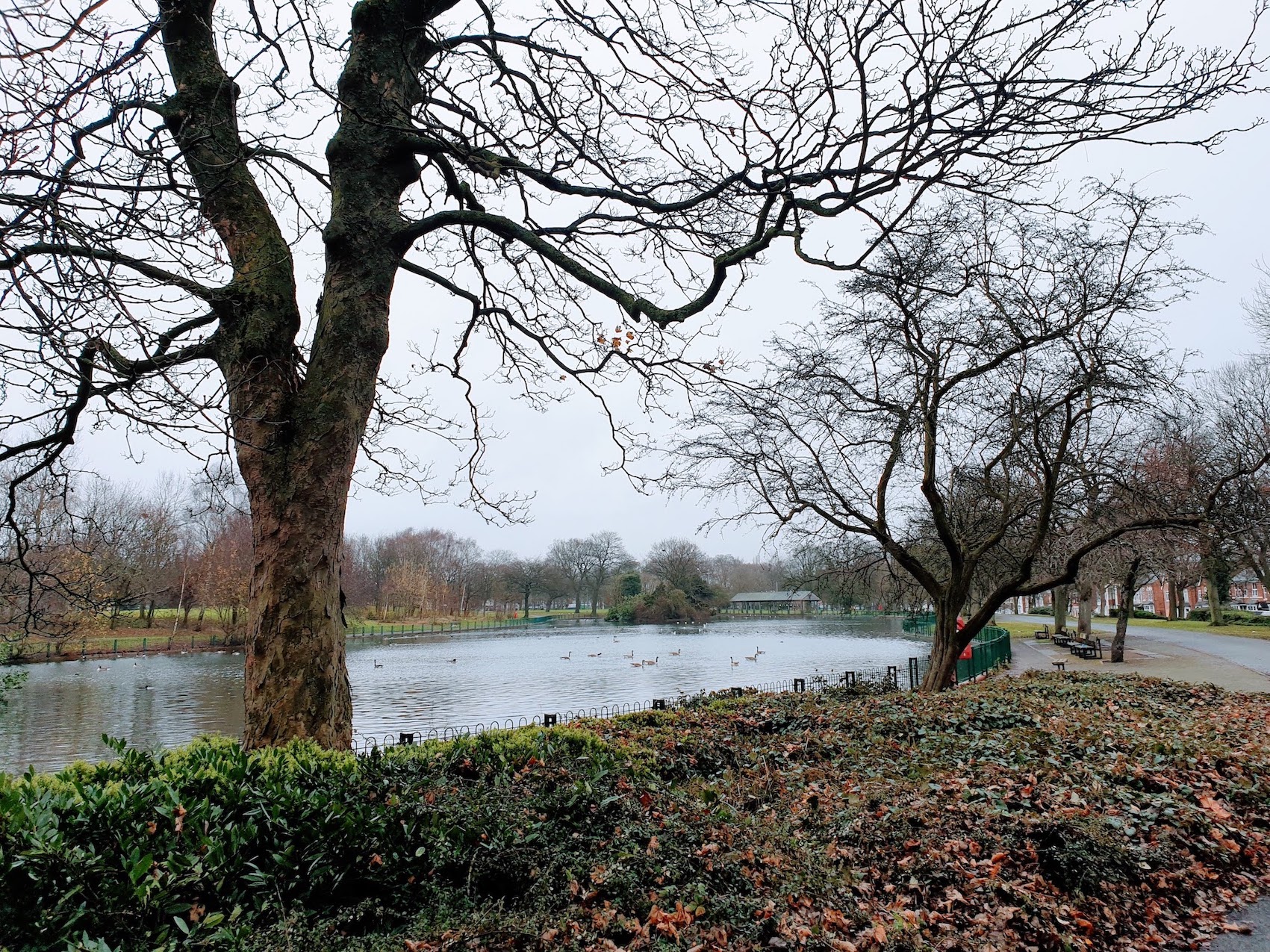 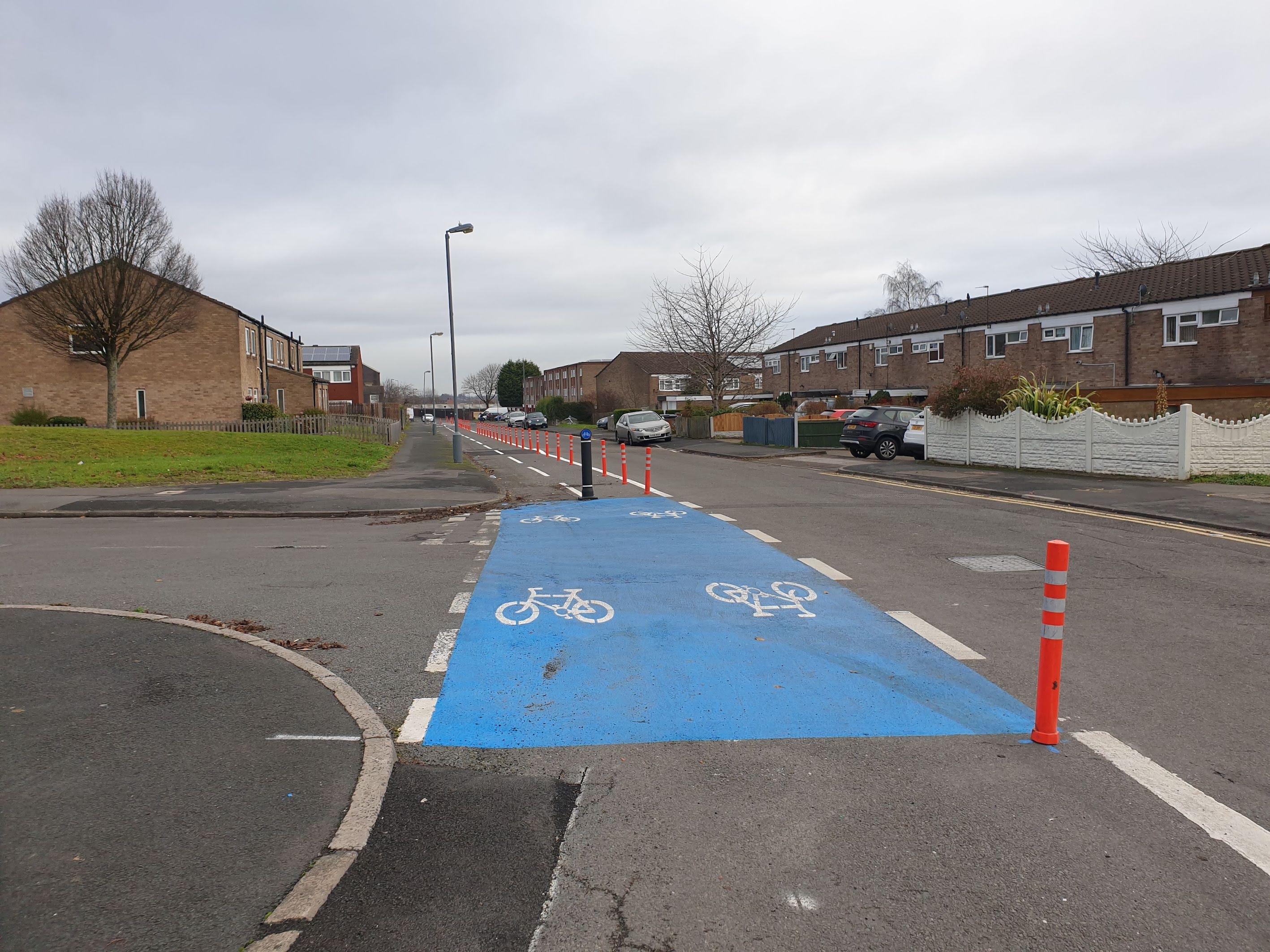 My family live this side of the city, we are regular visitors of Small Heath Park and my old school being on this route I was delighted to see this pop–up cycle lane. It is also a route into the city centre, passing several schools and a main supermarket, a fantastic opportunity for local people to feel confident to cycle. There are a few too many points where it’s unclear where you need to go. This is an issue when you are directed to cycle on the pavement in sections that are busy with pedestrians. This currently doesn’t work well, but these are small things which can be fixed as the trial progresses. Overall this is a great cycle route, making cycling possible for so many people. Even better, I found the drivers in this area were great. They gave way to me on my bike when required; I had lots of smiles from them and even a wave. If you live in the area I definitely recommend giving the route a try! there’s even a few community cycling groups based in Small Heath park if you feel you need some practice before going out on your own. You can search for information on rides in the area HERE. 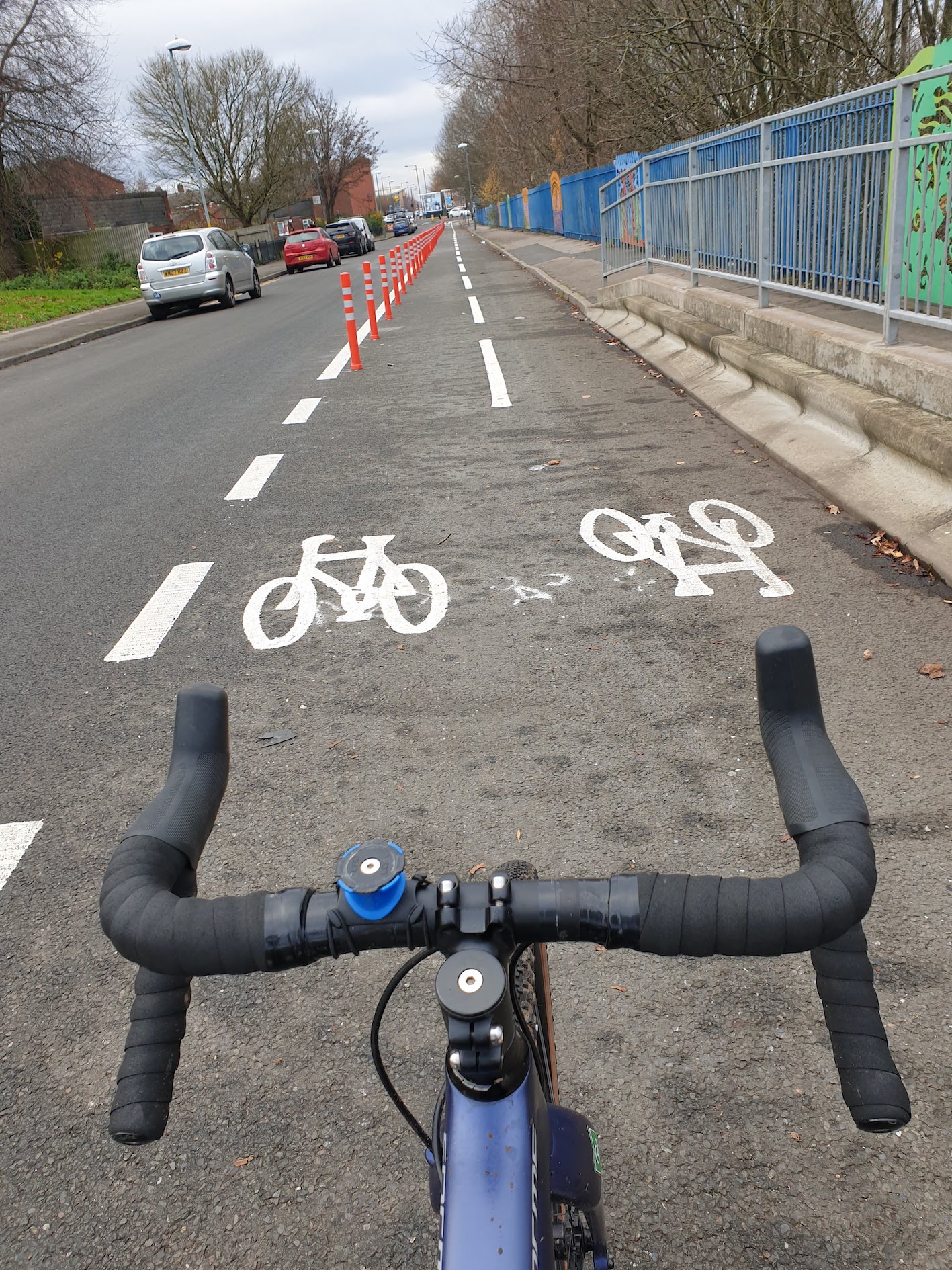 I was not immediately excited by this cycle lane when I first saw it advertised. However, after studying the map I found that it’s not just those who work at City Hospital that will benefit from using it. I was very happy when I saw the route connected well with the Harborne Walkway. This has served me well as a craft beer enthusiast. With bars being closed at the moment, the monthly beer run is a priority! A safe route from town via the Jewellery Quarter (The Craft Inn/The Wolf) to Harborne (Hop Garden Harborne/The Paper Duck) is a dream. 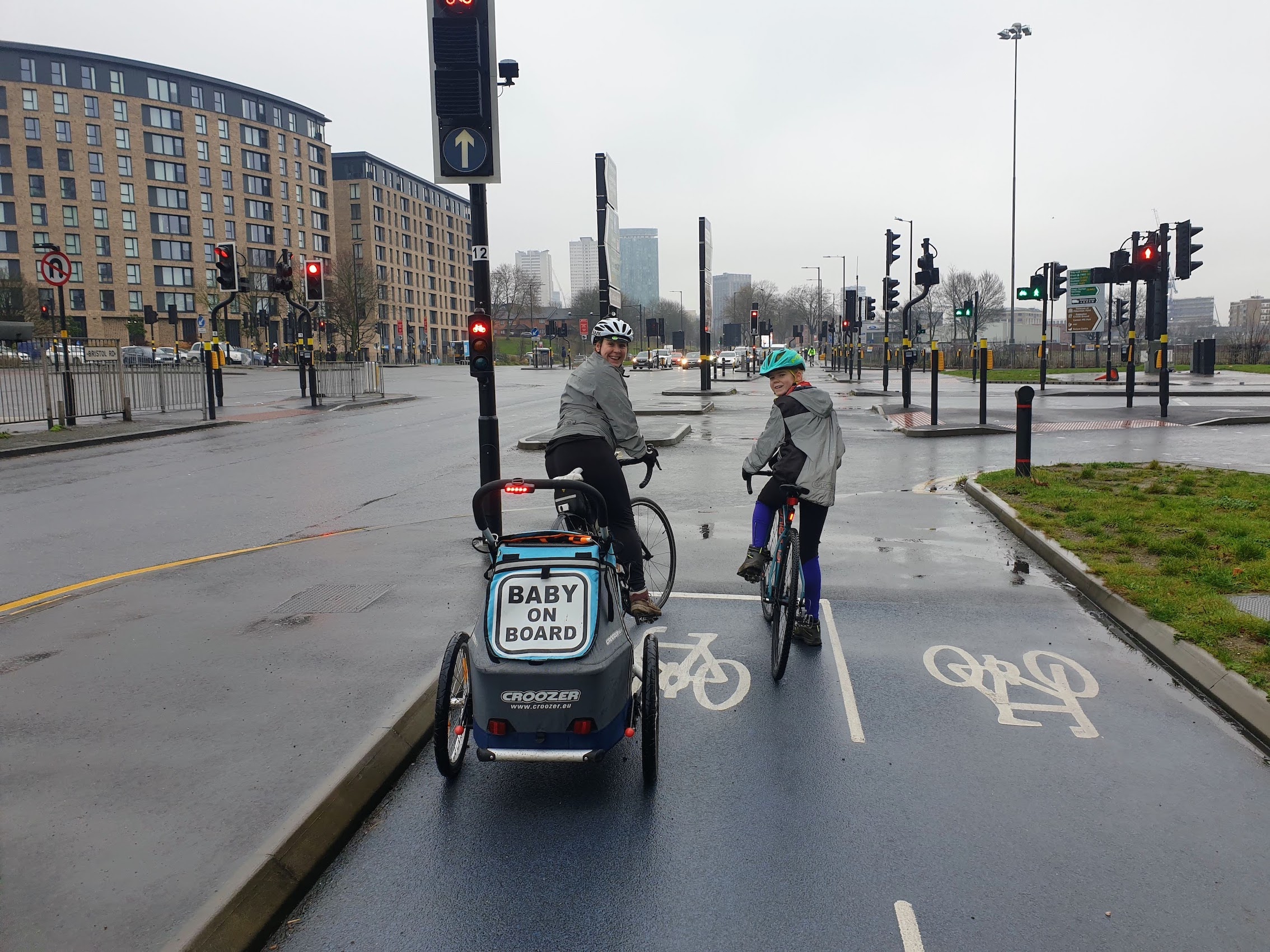 This is also a good route if you’re looking for a city loop ride as a family, and is even trailer friendly. I met my colleague and partner in crime Esther, her teenage daughter and baby in the trailer on the A38 Blue route, and we enjoyed a lovely ride into town, and out to Harborne via this pop-up cycle lane. It had been so long since we’d all been into town and we felt like proper tourists! Off course there was also a cafe stop! Being able to link up to a route like this that is suitable for all ages and abilities in the city was amazing – we had a wonderful day.
Check out our route HERE.

We would love to see a better transition in both directions at Icknield Street junction, some more regular clearing of fallen leaves on Hingeston Street and more signs for bikes on the Dudley Road to direct them on to the pavement and highlight where to cross. This is by far my favorite of the pop-up cycle lanes, and would definitely recommend anyone getting out and giving it a go. This road is well-used road by people on bikes, and was long overdue a cycle lane. We use this road on regular group rides when coming off NCR 5 and into Digbeth. It’s nice to now be able to stop and appreciate the street art or take your time going up the hill without worrying about the traffic or cars putting pressure on from behind. The view going into town is not too bad either, a great addition to the cycle network in the city centre.

There are a few pop-up cycle lanes which I have not yet tried, these are:

City centre to Fort Dunlop (A47 corridor) – reallocation of road space, direction signs and other access improvements to connect the city Centre and its Learning Quarter (including Aston and Birmingham City Universities) to Nechells and Saltley. This will also link, via the existing cycle route on the A47, with key employment sites at Fort Dunlop and Jaguar Land Rover at Castle Bromwich.
A38 to A34 (city centre connection) – linking the A38 and A34 Birmingham Cycle Revolution schemes, to enable cross-city Centre trips. This will also connect with the Bradford Street and A47 corridor routes (above).

The pop-up lanes above are currently temporary, part of a trial scheme – and we are loving them! These changes would be a great improvement to the city’s cycling infrastructure if made permanent.

You can find a MAP of all the pop-up cycle lanes HERE with more information and the place to leave your vital feedback for these to be improved or made a permanent fixture in Birmingham is HERE.

If any of these pop-up cycle lanes are routes you use regularly, we would love to hear your experiences, see any pictures, and share them with our audiences. You can send them to [email protected]


We use cookies. By browsing our site you agree to our use of cookies, Find out more